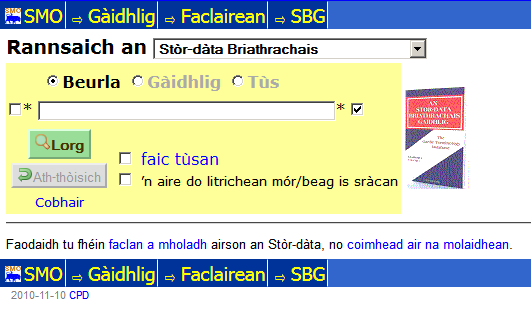 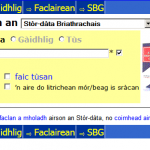 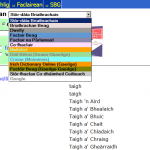 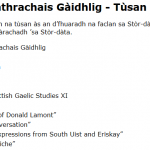 The online version of the Stòr-dàta Briathrachais is based on a printed version of a dictionary containing technical terminology published by Clò Ostaig back in 1993. Originally this was envisaged to be a series of books but we have a feeling something got in the way as Volume 1 is the only one that was ever published.

An online version was produced in 1994 and some staff at Sabhal Mòr Ostaig have dedicated a lot of personal time to expanding it since. The current version contains additional entries from a variety of sources.

It gives a certain amount of information about the gender of nouns and suchlike but when using it, it should be borne in mind that it is essentially a large wordlist rather than a dictionary. Having said that, it offers a very quick way of accessing the meanings of a lot of words.