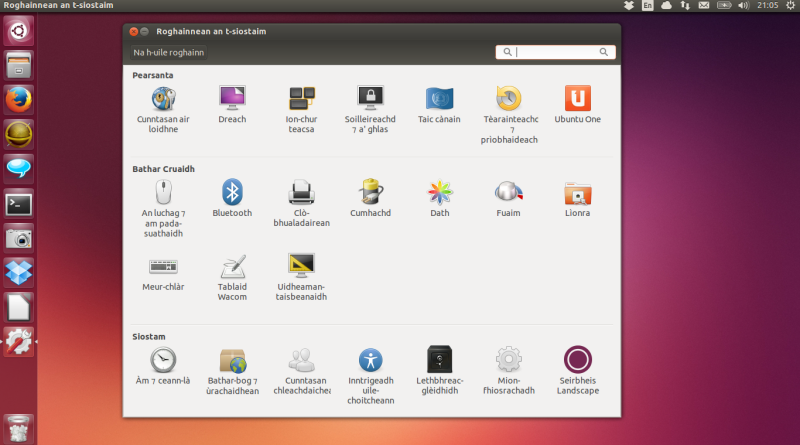 Ubuntu is now also available in Gaelic. Technically it was available before October 2013 but the translation was so terrible we did not want to promote it. However, we did a lot of proofreading in 2012 and 2013 and the latest version is nice and clean. That would be version 13.10, don’t try any of the older ones.

Now, why would you use Ubuntu? Well, it’s the most user-friendly version of Linux there is, it’s an open source project which is continually being developed by an international community of, well, geeks and it’s really quite powerful. That and it’s free of charge – and available in Gaelic!

If you’re not entirely certain about it, there are various ways in which you can try it out (for example by running it from a USB stick) or maybe next time you buy a new laptop, keep the old one and put Ubuntu on it?

There’s not a lot we can add here in terms of instructions which are not already explained in great detail on the web somewhere, especially Ubuntu’s own website. So just two things:

1. You can select Gaelic during the installation: 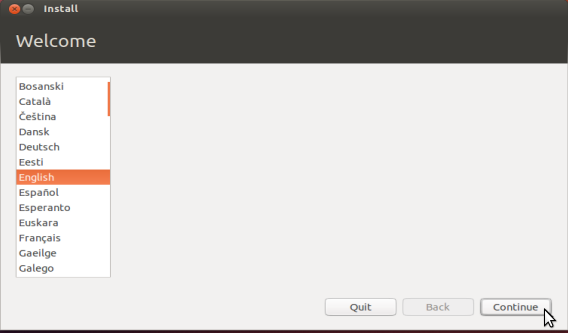 But if you prefer to run the installation in English (I can totally understand why you might feel more confident doing it that way), you can always set it to Gaelic later on if you go to the Dash (that logo at the top left). 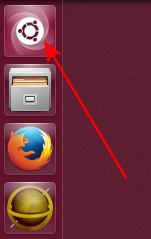 Search for Settings and then go to System Settings: 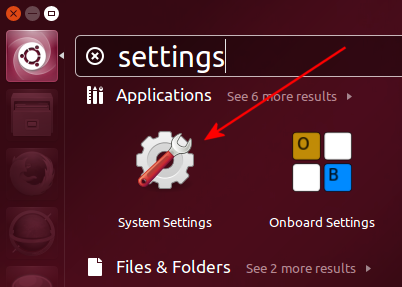 You’ll see the option to Install/Remove Languages…, click that and pick Gaelic, Scottish and then hit Apply:

Then make sure that Gaelic, Scottish is above English in this list: 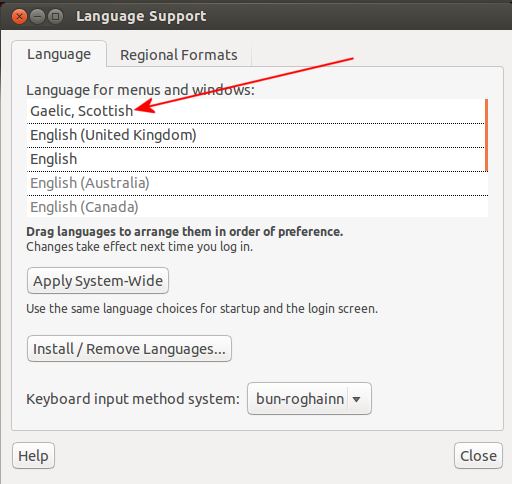 That’s it. If everyone using this computer has Gaelic, you can also click Apply System-Wide. You will have to log out and back in or, even better, reboot the computer.

2. When it asks you what keyboard you want on this screen: 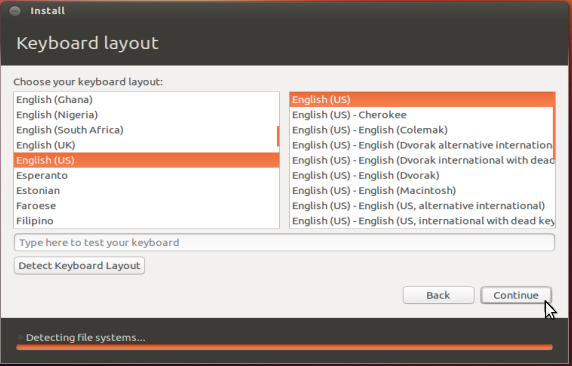 don’t let it pick the default Gaelic keyboard, that’s totally useless (long story, we have requested to change this and they will, just when is a good question). The most user-friendly keyboard is English (UK, extended Winkeys). If you want to know why, click here.

If you had one of the old Gaelic translations of Ubuntu, I’d recommend you do the following too:

There are some system folder (like Pictures) which have really odd translations which a simple upgrade to 13.10 will not fix (they’re “frozen” names). But if you do the above, it will move them from Pioctairean » Pictures » Dealbhan. There’s a slack handful of them and this will fix them all. Don’t worry, it won’t mess up the system!

For some reason upgrading between two versions of (Gaelic) Ubuntu sometimes makes the language packs gets their knickers into a twist. Usually what will happen, for example after upgrading from 14.04 to 14.10, is that Firefox is suddenly in English. It doesn’t damage anything but obviously you want Gaelic back.

Click the little gearwheel at the top right and select Roghainnean an t-siostaim: 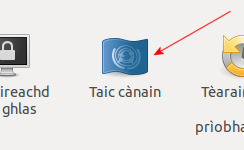 You will immediately get a popup telling you there are langpacks missing and it will ask you if you want to install them. Agree to that and that should be it. For Firefox anyway. Regarding LibreOffice you may have to take an extra step. Start LibreOffice and if it’s still in English after installing those extra packs, move the mouse onto the top toolbar and click Tools and then Options:

Click the little triangle next to Language Settings and then Languages:

Make sure Gaelic is in all 3 boxes on the right. Then click OK, restart LibreOffice and that should be it.

That aside, all that’s left to do is to point you at Ubuntu’s website.