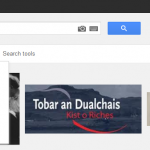 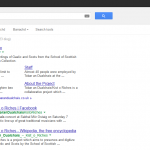 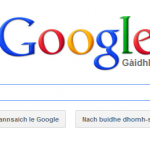 The Gaelic version of Google came out in 2002 while Google was still running their Google in Your Language project. Sadly, they shut it down round about 2010 – goodness knows why – and are now doing their own in-house translation. Which of course means that all those small languages that helped Google on the way up are now left in the lurch. So the Gaelic version is still there but it’s no longer as full of features as the English version is. If all you do is “just searching” then it’s perfectly serviceable though.

Oh, Google did some silly stuff to their interface design which now means that the easiest way of making sure you land on the Gaelic page is to bookmark the following link: http://www.google.com/webhp?hl=gd (all that bit at the end does is tell Google you want Gaelic) and/or set it as you default homepage. Alternatively, look for the cog on Google, click on it and go to Search Settings » Languages (on the left hand side) » Scots Gaelic. It tends to forget this setting though.

If you’re willing to give something new a shot, there’s also DuckDuckGo which is now available in Gaelic too.