No, you don’t have to buy new hardware for this. Once you have a physical keyboard, your computer still needs a bit of software that tells it which key does what. Most of the time, in Britain, your PC will have been set up with the UK Standard Keyboard. So all you have to do is tell the computer to handle the same physical keyboard a bit differently. By the way, we recommend you use this layout even if you’re using Windows 8 in Gaelic, that comes with a less powerful keyboard (basically it has the grave where UK Extended has it – on the ` next to the 1 key but nothing else), so it’s best to use the UK Extended one.

That means (whether it’s showing in English or Gaelic) that you have an English keyboard installed but just the normal one. Off to the right now, click on Roghainnean/Options:

On the next screen you’ll see a section called Modh an ion-chuir/Entry method and Cuir modh ion-chuir ris/Add entry method underneath it. Click that: 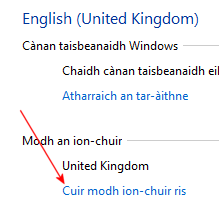 You’ll see a long list of QWERTY, DVORAK and other keyboards. Scroll down almost to the bottom and you’ll see one called United Kingdom Extended. Click on it once (it’ll go blue):

And at the bottom hit Cuir ris/Add:

Now you’ll see that you’ve ended up with two, which isn’t practical so we recommend you remove the boring one by clicking Thoir air falbh/Remove next to United Kingdom (don’t remove the United Kingdom Extended keyboard):

Now you’ve only got the right one left:

Click Sàbhail/Save at the bottom of the scree now:

If you have more keyboards installed, we recommend you move (using Gluais suas/Move up) English (United Kingdom) – Extended to the top. As we already said, there are seriously annoying things about the Gaelic keyboard Microsoft ships, sadly: 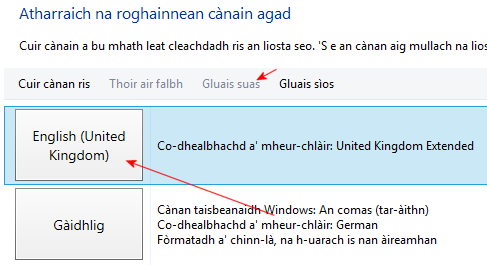 That’s it. Same thing if you want a US or Canadian keyboard, you just have to select a different flavour of English:

So how do I get the graves then?
As easy as falling off a bike. To the left of the 1 key, you’ll see this key: