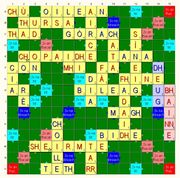 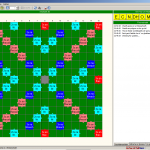 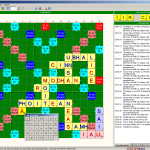 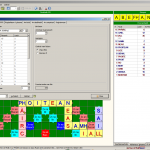 It’s Scrabble as a computer game. Simple as that. Well, there are other really snazzy things about it to. For one thing, the interface is in Gaelic and there is a Gaelic letter set that was especially designed for Gaelic so no more messing with English letters to struggle through a Gaelic game. Apart from standard games, the program also does SuperScrabble and Scrabble3D. Against your computer (and you can adjust how smart or dumb the computer will play) or on a network against people. And there are lots of other languages, from Irish to Catalan and French to Swedish.

You can get the file here, the green Download button (ignore the advertising):

Once you have the right file, double-click on it and follow the on-screen instructions. It’s not hard and the program will update itself too if there’s an update (provided you’re connected to the web).

You can just start playing but it’s really worthwhile checking out the settings, there are so many ways of modifying games, for example the dictionaries. You can play with the pretty basic default Gaelic dictionary but if you want a challenge, why not include the wordlist from the Faclair Beag? And if you really reckon you’re a level 50 Wordmaster, try it with the words from Dwelly too!

1. Where’s the h?
There isn’t one. When we started designing the Gaelic set, we did some research on letter frequencies and such things. Initially we did have one letter on each tile but that didn’t work at all. Too often you’d end up with a handful of h’s and nothing else that was useful. We then tried the digraphs that are more natural in Gaelic anyway – bh, ch, dh, fh, gh, ll, nn and so on. And lo and behold, that worked really well. So that’s why there is no h.

And fill in this window (just make up a password but don’t forget it): 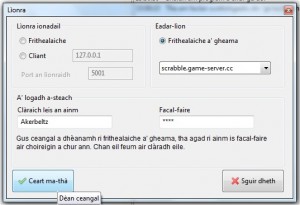 You can now see who’s online. The flag on the short shows the country the player is from, the other flag the languages they want to play. Right-click on the person you want to play with and invite them: 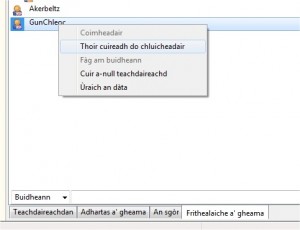 The person who sent the invitation now has to start a new game: 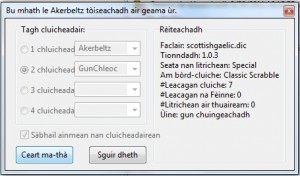 Glad to hear that! If it shows your city as some strange place in England (something to do with your ISP), you can change that. Look for the file Scrabble3D.ini (in XP that’s under Documents and Settings » Local Settings » Application Data » Scrabble 3D, in Win 7/8 Users » Home » AppData > Local » Scrabble 3D) and put your town in the line for NetworkCity= (using a text editor like Notepad)

4. These words are too boring…

By default, the game is installed with the basic dictionary. For that, we created an 8,500 strong word list which contains only commonly used words and some of their derived forms. But if that’s too tame, you can make it harder. Open the program and go to Roghainnean » Roghainnean and pick additional dictionaries: 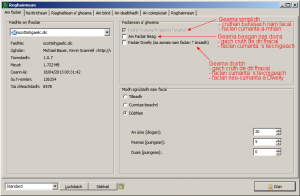 What’s the difference? Well, there are short explanations in the screenshot above but here are some additional examples for you: