No, you don’t have to buy new hardware for this. Once you have a physical keyboard, your computer still needs a bit of software that tells it which key does what. Most of the time, in Britain, your PC will have been set up with the UK Standard Keyboard.  So all you have to do is tell the computer to handle the same physical keyboard a bit differently. By the way, we recommend you use this layout even if you’re using Windows 8 in Gaelic, that comes with a somewhat psychedelic layout courtesy of we-don’t-know-who, so it’s best to use the UK Extended one.

Keyboards and Languages / Change Keyboards or other input methods »

You’ll see a window similar to this one, click on Add » 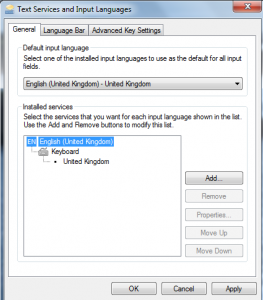 You may have to scroll up or down a bit due to the differences between different systems. If you see a + somewhere, that means you can click on it to display more options. Once you have found English (United Kingdom), tick the box next to United Kingdom Extended » OK 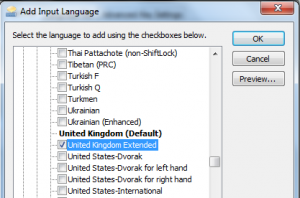 Depending on your settings, your may not see the language icon straight away:

If you can’t see it, it’s probably best to restart your system and it should appear.

These are so complicated we don’t recommend them at all but on occasion, say if you’re on someone else’s PC, they might come in handy. These are hardwired into Windows so you don’t have to set up anything. Press and hold the ALT key and then enter the following number sequences on the NumPad to get accented letters:

If nothing happens, make sure you pressed NumLock. These won’t work on laptops!