It’s technically not a new spellchecker but just the old LTS Spellchecker re-packaged. It works in Microsoft Office 2013 and checks about 200,000 words (though there’s a way of extending that, see below).

It annoyingly assumes you know if you’re on 64 or 86-bit Windows – typical developer way of doing it – but anyway, if you’re not sure, just download both and try one after the other, worst case scenario you click on the wrong one first and it tells you you can’t install it: 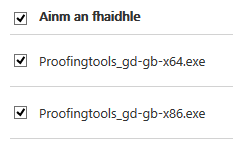 If you’re lucky, all that remains is to open Office, write some text and it should put the red lines underneath bad spellings:

If you right-click on such an underlined word, you’ll see recommendations: 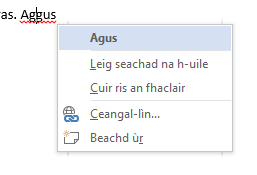 1. I’m not seeing any red lines

Most likely you have the spellchecking switched off. This is rather counter-intuitive in Office 2013. Click on Faidhle (File):

The down to Roghainnean (Settings): 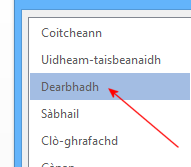 Most likely, you need to put a tick next to Ceartaich an litreachadh (Check the spelling):

While we’re here, click on Roghainnean an fhèin-cheartachaidh (Autocorrect Options):

We’d really recommend you untick the Replace text as you type box. You’re always in danger of Office turning Tha into The without noticing: 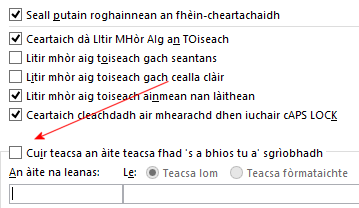 You should be seeing the red lines now.

2. I see them but they’re under the wrong word

That’s Microsoft for you. Office 2013 is very annoying in the way it tries to assign a language to your text. Even if you tell it it’s Gaelic (or something else), it tries to rummage through your system settings, your keyboard layouts – basically it will listen to ANYTHING but you the user telling it what language it is. I sometimes get paragraphs where it thinks the first sentence is Gaelic, the second German (because I have a German keyboard) and the rest in English (South Africa). Goodness knows where it’s getting that from…

Anyway, if that happens, check it’s trying to check in the right language at the bottom of the screen:

If this is driving you up the spout, just switch it off, finish writing and then mark the text as Gaelic once and check for errors.

Click on the blue bar where it tells you the language and pick the right one: 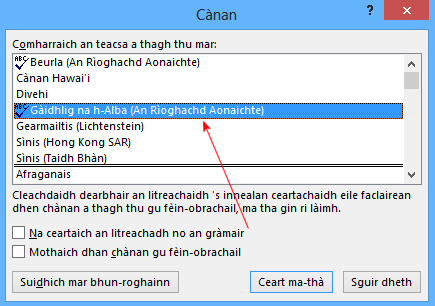 And it should work now:

3. There are red lines under a lot of words which I’m sure are right

As I mentioned, this is just the old LTS newly packaged. Not a lot of fixing or indeed extending happend and even though they were offered the big list from the Dearbhair Beag, they turned it down.

But there is a way. Although it’s not possible to fix the gaps and errors that it inherited with the LTS file, since there now is a Gaelic lexicon file, you can extend that with a custom dictionary. Now you may not need that if you’re looking at primary school level stuff but for a dissertation or an author, having the extra capability might well come in handy.

Grab this zip and unzip it. There’s a file in it called AnDearbhairBheag.dic. Copy this and paste it into the folder where Microsoft keeps all the proofing files. Usually (on Windows 8) that will be under C:\Users\Home\AppData\Roaming\Microsoft\UProof If you suddently see lots of .lex files, that’s the right place. Paste the AnDearbhairBeag.dic there:

Make sure you’re in \UProof and not \Proof, that got me several times.

Make sure you pick Gàidhlig na h-Alba as the language for the file:

And instead of this kind of thing:

It will be smooth sailing:

That pushes the wordcount from some 200,000 to just over 1.1 million words. Happy spellchecking!