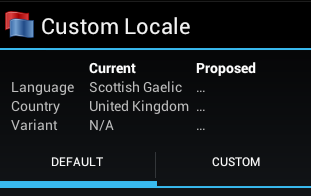 This unfortunately no longer words in Android 4.2 or newer (Android blocked this feature). I’m trying to work out solutions app by app but that may take time.

If you’re on an Android phone, you’ll have problems getting you’re phone to give you programs in Gaelic (or indeed other languages) that aren’t on Android’s list of languages. Big ones of course. It’s down to something called force locale – a setup which forces all software to show up in the language of you’re operating system. That sadly means English. Developers call this a feature but to a lot of people, those not on the privileged list, it’s better know as hellspawn.

Anyway, there’s a workaround. You can install an app on Android which makes you’re phone think its language is Gaelic. While that won’t have any impact on all the junk you get with Android, it will force those programs which are available in Gaelic to show up in Gaelic (like Opera Mini for example).

This is what you need to do. Open Google Play and get the Custom Locale (by InKa) app and install it. Open Custom Locale an you’ll see the following screen (if you’re in Britain): 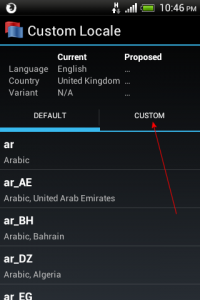 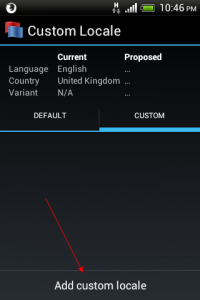 There’s a list of languages and countries but it’s long and it’s quicker to just enter the following: 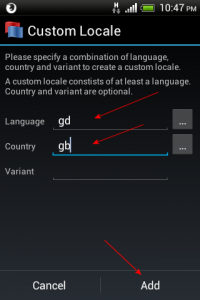 gd = Gaelic, GB = Britain. If you’re in the states, enter US, CA for Canada, AU for Australia and so on. You’ll then see this screen; tap on gd_GB: 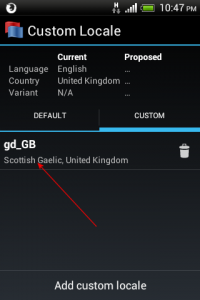 You’ll see a bit tick in the top right corner, which you’ll have to tap: 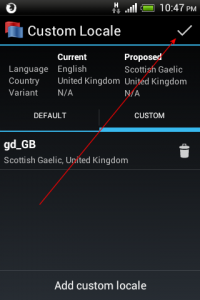 It will ask you the following, best to say Yes: 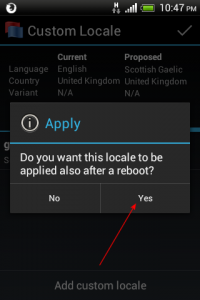 If you see the following on the Current tab, you’re there: 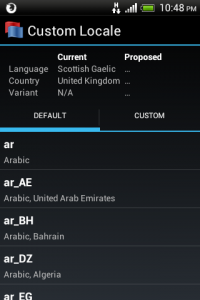 Doing this will impact the following apps on your phone: