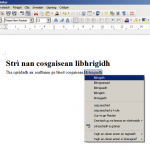 The Dearbhair Beag is a multi-platform spellchecker which is based on the Faclair Beag and currently the biggest spellchecker available. It currently corrects over 1.5 million Gaelic words (version 3.1) and keeps growing. Oh, it’s pronounced [əN dʲɛravɛrʲ beg], incidentally, meaning ‘the little (spell)checker’.

To make things easy for you, we’ve integrated it with the following programs:

So that means that if you have installed the Gaelic version of these programs, it will already be there. If you’re using the English versions or if something went wrong for some reason or other, you can also install them manually from here:

You can control the spellchecker right from the toolbar using the two ABC icons:

If you want to set the spellchecking to being on all the time, go to Tools » Options » Advanced » General (the tab) and tick the box Check my spelling as I’m typing.

Similarly, if you want the spellchecker to be on by default, go to Tools » Options » Composition » Spelling (the tabs) and tick the box next to Check my spelling as I’m typing.
FAQ

Yes and no. Gaelic spelling is far from settled and even GOC has so many gaps in it that it’s impossible to use a single, clean, consistent orthography. Plus there are strong emotions involved on either side and we didn’t want to get into that debate. So we created an open spellchecker. What that means is that the Dearbhair Beag will correct all those things for you which are definitely typos (for example mmòr). But beyond that the choice is entirely yours, so there are no red lines under mòr or mór as both of them are “correct”. So it’s good to use if you follow GOC or a traditional system or indeed a mix.

2. Can’t you do one for Microsoft Office?

As we said elsewhere, we’re trying to get a spellchecker for the latest versions of Microsoft Office but we can’t promise if and when. In the meantime, there are a few workarounds you can use.

3. But I don’t want a program to automatically change my spelling

Relax, it doesn’t. There were spellcheckers which used to do that but the Dearbhair Beag doesn’t. All it does it put a red line under stuff that looks fishy and then leaves it to you to decide if it’s right or wrong.

4. Does it work anywhere else?

Yes, any program that supports Hunspell (that’s the engine which the Dearbhair Beag uses, the most common spellchecking engine in the Open Sourc world). For example, it also works with:

5. I can’t see it even though I have Firefox
Software can be annoying like that sometimes but it’s easy to fix. Visit the extensions site of the spellchecker on Mozilla and click Add to Firefox: 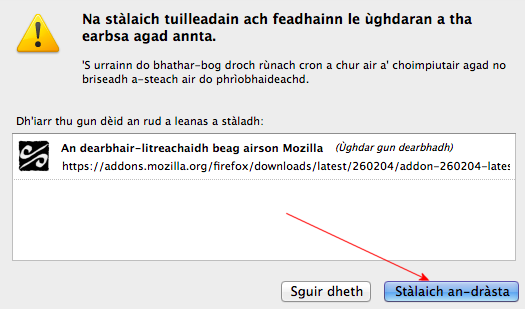 Now, write a badly spelled word anywhere in Firefox, like the Google search bar and then right click (or ctrl click if you’re on Mac OSX) and pick Ceartaich an litreachadh (and the language): 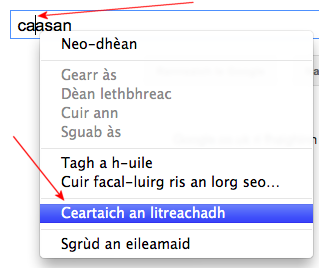 Now if you right click on a word with the red underline, you’ll see the spelling recommendations of the Dearbhair Beag: